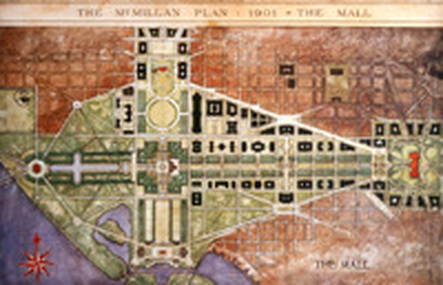 A - B - C - D - E - F - G - H - J - K - M - N - P
Proponents of the Poe and Rockefeller Bills in Congress say that Pershing Park isn't a worthy substitute for a true, national memorial to World War I on the National Mall.  This is why proponents of these bills want the District of Columbia War Memorial re-designated as "The District of Columbia and National World War I Memorial."  You can read AOI's testimony and position papers on why we feel this is wrong.  Congressional legislation prohibits any 'new' memorials on the National Mall (see Peter May's concerns), thus, the only way to have a National World War I Memorial ON the National Mall is to co-opt the District War Memorial. However...  our research has revealed that according to the 1901 Senate Park Plan (aka the McMillan Plan) for the National Mall, the square which is currently occupied by Pershing Park (the American Expeditionary Forces Memorial, established by the American Battle Monuments Commission) IS, in fact, part of the National Mall! [on the accompanying graphic, Pershing Park is located at the intersection of the letter 'G' and Pennsylvania Avenue]

Pershing Park is located between 14th Street and 15th Street, between Pennsylvania Avenue and E Street (directly in front of the Willard Hotel and across from the Commerce Department).  At the 'intersection of H/4 above at the top of the greenish boarder designating the Pennsylvania Avenue/northern-most portion of the Mall...the 1901 Senate Park Plan designated this area a portion of the Mall.